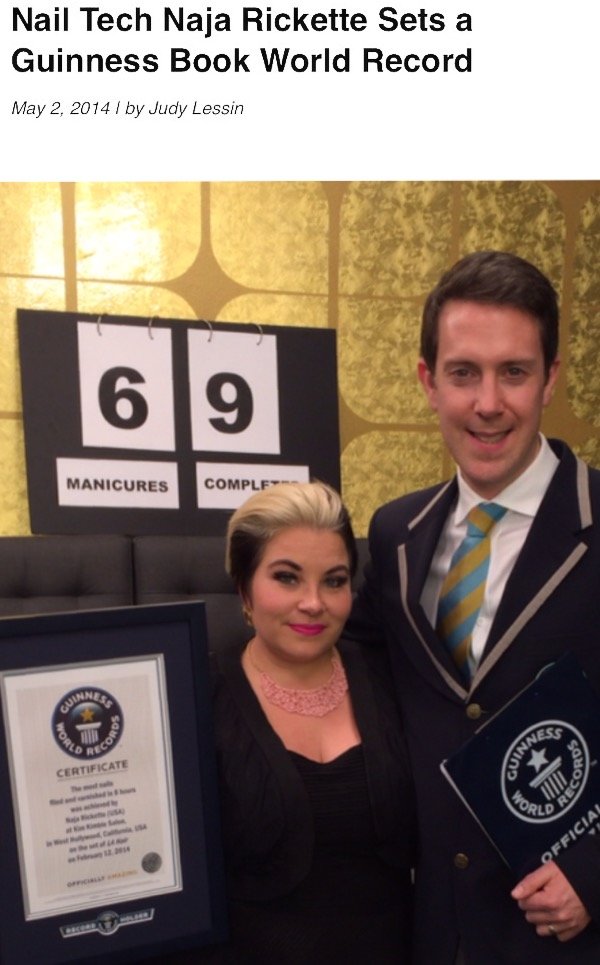 We have a new record! Congratulations to Naja Rickette, Hollywood nail stylist, reality star, and now the new Guinness World Records title-holder for polishing the highest number of clients in an eight-hour period. Naja’s world record will be featured in this season of LA Hair, WE TV’s LA-based reality show in which Naja stars. Get the scoop on Naja's experience setting the new record in the interview with her below!

Essentially, the record stands for the most polish changes in 8 hours. A standard polish change at a nail salon involves shaping the nails, removing any old polish and then polishing. I had to reach 50 people in order to set the record, which I achieved at the 6-hour mark, so I continued on to the full 8 hours to see how many more people I could do. I wanted to give it 110% and get to the highest number of people that I could complete in 8 hours.

Was it your idea to attempt to achieve a world record? When did you seriously start to think about this, and how did you find out who to contact at the Guinness World Records organization?
It was my idea! Nailpro Magazine put on a nails-only beauty show last year in Pasedena, California. Nailpro Competitions held a contest for the Fastest Full Set of Acrylic Sculptured Nails. I thought it was such a progressive thing for our nail industry, and that it would be really fun to try and set or break a record. I am an achiever with a competitive spirit, so this is right up my alley. I contacted Jewell Cunningham, the director of Nailpro Competitions, to see who to contact. 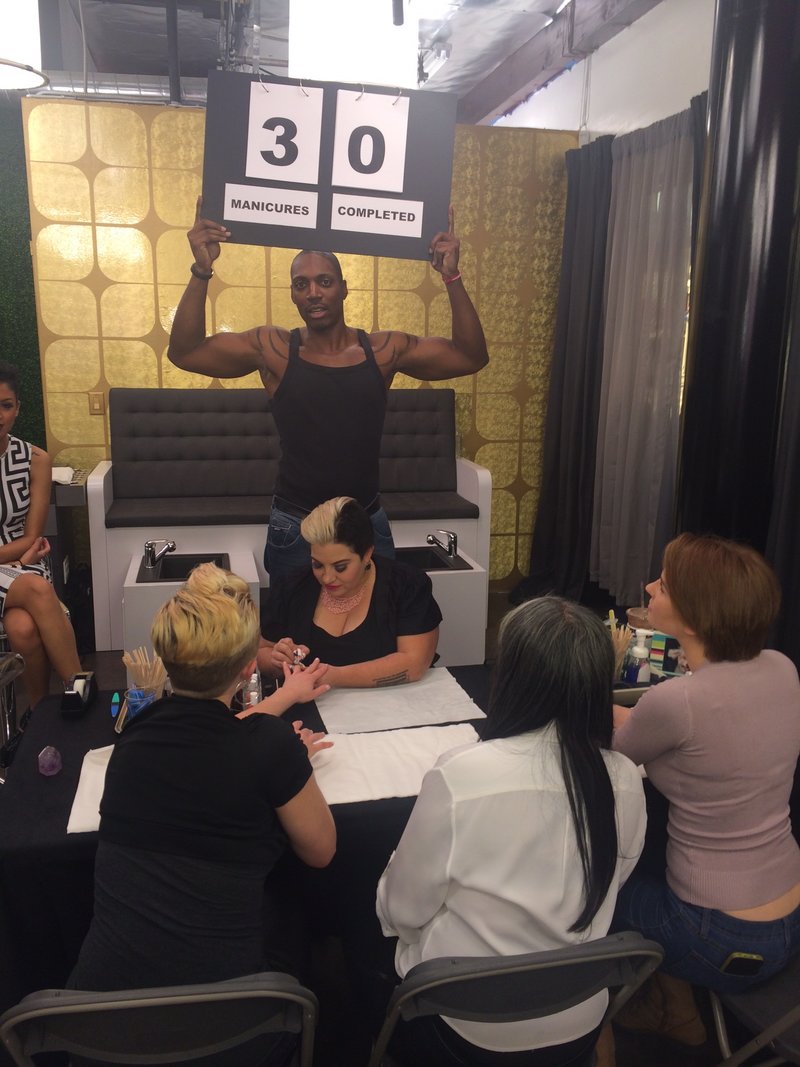 Was the 8-hour period an arbitrary choice? Who decided the parameters for this record and what other role did the Guinness World Records representatives have?
Guinness World Records set all the parameters. There was a set of rules and steps that needed to be completed on each client. If these steps were not performed or if one step was missed, then that client would not count towards my final number and would be disqualified. Philip Robertson, the Guinness World Records adjudicator, was there as the official counter of finished clients, to officiate the 8-hour time period, and to enforce that all pre-qualified steps were performed. As soon as the 8-hour clock began, it ran continuously and never shut off. Bathroom, lunch and stretching breaks all factored into the 8-hour time period.

For female participants, the steps I needed to complete were as follows:

If I was working with a male participant, then I completed the same steps except I would buff the nails to shine rather than polishing them. All the female participants needed to be polished. They could not get a buff shine. 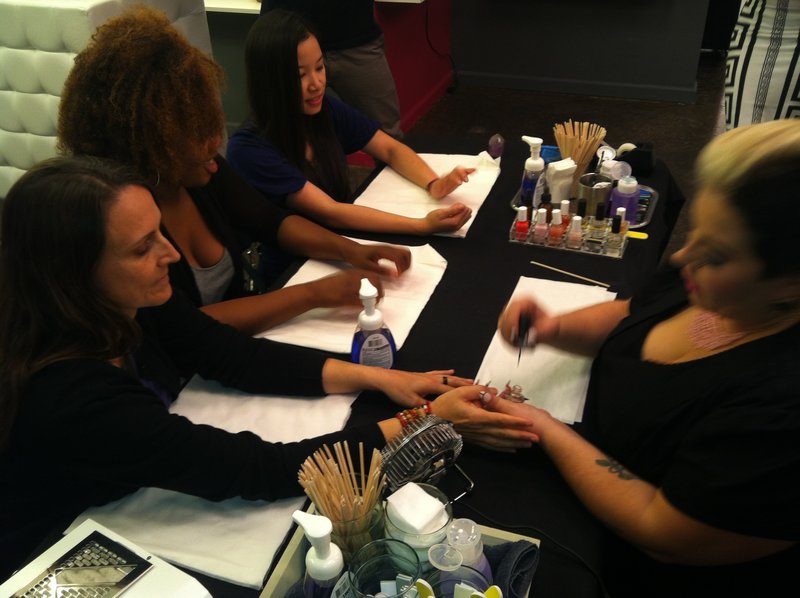 Obviously the record measures how quickly you polished nails, but was there also a quality standard?
Yes. I couldn't just throw polish on and call it a day. In the rules it stated that the finished nails needed to be "salon standard quality." Not only did I need to be extremely fast, but I also needed to do a great job. There needed to be a qualified manicurist present to check and approve each completed client before they were counted. If the polish or filing was not approved, then that client would be disqualified and would not count toward my final number.

Before I received the rules, I had planned on polishing the participants by going straight to color, omitting the base and top coat. When I work at fashion shows or for very time-sensitive set work, I often polish nails in this manner as the polish doesn’t have to stay on for long. But, when I received the official rules, I saw that I had to complete the participants using both base and top coats, and the nails had to be salon quality.


Was there a team present to assist you, or were you strictly working alone?
Philip from the Guinness World Records organization was present to monitor, and I had my assistant present to feed me, give me water, and massage my neck and legs all while working frantically throughout the 8-hour period. I could not stop! My assistant also kept me on track with regard to how many people I completed. And, as there was a crowd of people present, he also kept them apprised of my progress.

I had large groups of people scheduled to come in every 2 hours. While they were in the waiting area I had my assistant explain the rules to them and what was expected. Most important on my list was that the participants could not use their cell phones while I was working on them, or even set the phone on the table.  I actually told a fib that if they had a cell phone present they would automatically be disqualified by GWR.  That was my own rule, and not one mandated by GWR. I did not want to lose time by dealing with distractions or waiting for the participants to switch hands. No cell phones, period.

I called my good friend and mentor Kimmie Kyees to officiate that day and be the expert nail tech to approve my work.  However, she had a last minute call to do Rhianna's nails so she could not make it, and instead I asked Kandi Yamz, whom I had recently met at a beauty show, to be an official. 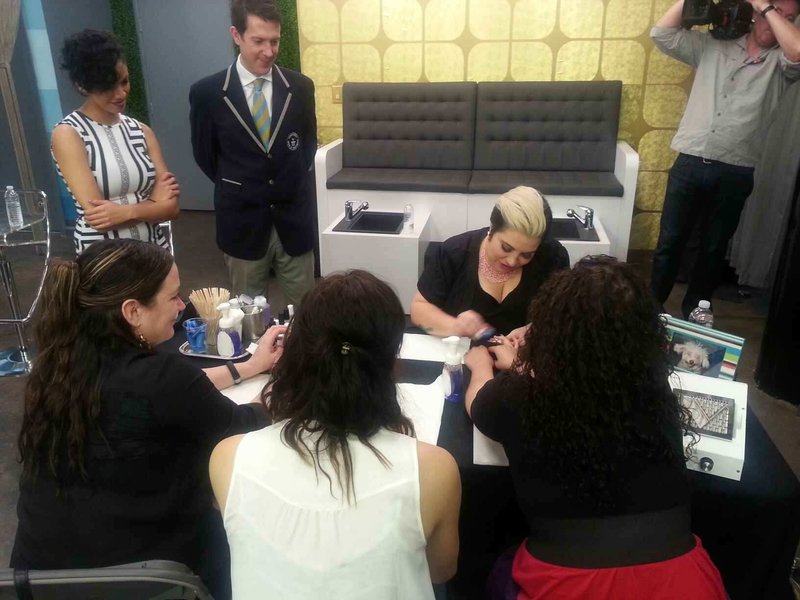 Where did the actual event take place?
We filmed the record setting event at the Kimble Hair Studio in West Hollywood, CA. The studio is owned by my close friend, famed hair stylist Kim Kimble who has been Beyoncé’s personal hair stylist for the last 17 years. It is also the set of LA Hair, the reality show on WE TV which I joined last year. The Guinness World Records rules stated that the record attempt had to be in a public venue so I was so honored that Kim allowed me to do it there.

Who was in the audience?
The audience was composed of the 20 to 30 people continuously waiting in the reception area for their turn to be polished, and a few of the stylists that work at the salon. I had my assistant keep my work area clear and tried my best to just concentrate on the three people at hand. My strategy was to have three clients sit in front of me. I would have them sanitize their hands while I assessed their nail condition. This was tricky because in most cases this is just something I silently do for my own notes while giving them a manicure. In this case in order for the Guinness World Records representative to know I completed the step I had to give my evaluation and condition of the nails out loud so all could hear.

How did you prepare for the 8-hour event?
I made sure I had a good night’s rest, I ate a big breakfast, and I did some stretching beforehand as I knew I would be sitting for 8 hours straight.

What nail polishes did you choose for the event, and how did you make that choice?
My two favorite polishes to polish with are Deborah Lippman and Essie polish. Right out of beauty school I started using Essie polish. I find it very user-friendly. The bottle easily fits in my hand and I like the width and length of the brush. It's my go-to polish on set when I normally am not polishing with a table and chair, but am often kneeling in between a hair and makeup person while the client is waving her hands, eating lunch and talking on the phone as I am trying to polish her nails. That can be very challenging, so I am very serious when I select the brush with which I am going to polish my clients!

I chose three Essie colors for the day: Madamoiselle, Come Here and Twin Sweater Set.
I used 80% of the bottle of Madamoiselle just in that day. I have never used an entire bottle of polish in one day’s work before!!  I would have loved to use the classic sheer Madamoiselle, but I chose Twin Sweater Set, a rich dark red, in case the client had troubled nails or pesky polish that I could not completely remove.

I also used one of my new favorite products: The Valentino Beauty Pure machine. It captures nail dust and odors at the source. I feel it was a life saver in this 8 hour marathon of polishing and filing.

What nail polish were you wearing for this important event?  Was that a hard decision?
I did not wear nail polish at all. Wearing polish would have a posed a problem when I was using polish remover to remove the participants’ polish as quick as possible. I opted for gel polish over acrylic nails. And, right now, I'm going through a black and white only nail craze. So I was wearing Essie gel polish in Blizzard & Leather.

Are there any other world records currently held in the category of nail polishing? What are they?
The most nails filed and varnished in 8 hours was 5,193 and was achieved by Beauty Connection Spa (UAE) at Dubai Mall, in Dubai, UAE, on February 14, 2014, but obviously this was by a large group and not an individual nail stylist.


How did you feel when you set the world record?
I felt very accomplished and very proud! It was a really neat feeling to have created a nail polishing record to be included in world records.  I also felt great satisfaction that I fulfilled my pioneering work ethic by setting a WORLD record. For this moment in time I have achieved something no one else has done in the entire world. It is a rewarding accomplishment that I receive with the utmost humility in the hopes of inspiring others to go out and give their all in achieving their dreams.

What did you receive from the Guinness World Records organization for setting the record?
I received an official framed Guinness World Records certificate, and my record will also be featured on their official Web site, www.guinnessworldrecords.com.  The record may or may not be listed in the new edition of the GWR book which will be out on September 2014.

How do you expect being a Guinness World Records titleholder will impact your career?
Well, I am definitely qualified to teach people how to polish with speed and precision for maximum results, repeat customers and more income! 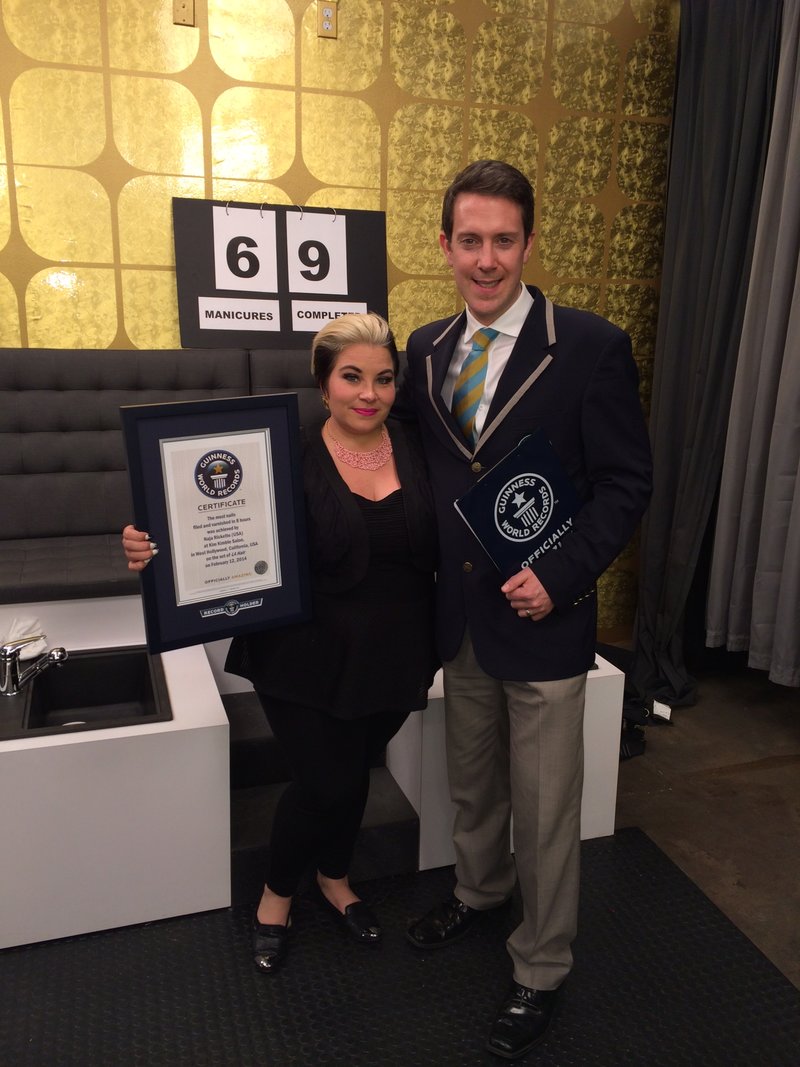