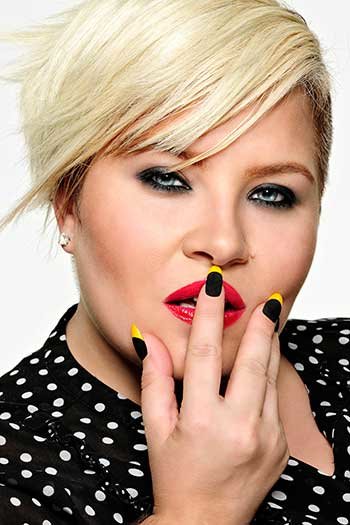 How We Got Started

In the middle of the hustle and bustle, slammed deadlines, LA traffic and crazy workloads that Los Angeles has to offer, Naja's calming effect and direct approach on-set and with individual clients, has given her the name "Naja Nail Guru."  Her child-like wonderment, joyful smile and meticulous natural manicure will captivate anyone, no matter where the setting and turn it into a spa-like experience.

A born artist with creative juices constantly pumping, Naja is a classically trained chef and New Jersey native who grew tired of “smelling like onions” and having to work every holiday and weekend.  So she turned her chef coat in and headed out west. With only $300, a dream and one stipulation for her new career…“that I could wear my own clothes,” she landed in Los Angeles, California.

Naja got her start in the spa business.  Her first job in the new City of Angels was the front desk coordinator at a luxury spa.  She soon fell in love with the whole spa industry, seeing spas as “the modern day hospital” providing true preventative care that yielded tangible results in skin conditions and overall well-being.  After a few years of booking other peoples’ clients, it was time to build her own clientele, so she decided on manicuring school. In her first week after being licensed, she made back all the money she invested into schooling by selling holiday gift certificates for future nail services. Some of those gift recipients are still her clients today.

With a manicurist license in her hand and no longer confined to a uniform, Naja secured at job a one of West Hollywood’s top nail salons where she studied the Egyptian method of reflexology. Currently Naja is a Level 3 Intuitive Reflexologist.  She quickly earned the position of lead manicurist and started offering luxury manicures for HBO’s celebrity packed gifting suites, along with exclusive in-home spa parties.

Naja made her mark in 2007, when she opened her own salon, Extremedys Hand & Foot Spa, a high end nail spa in West Hollywood California.  Pioneering the whole Minx Nails craze, along with specializing in reflexology pedicures, it quickly became an LA “hot spot” with frequent celebrity visits from M.I.A, Jennifer Love-Hewitt, Missy Elliott, Eve, Brandy and Mena Suvari.

As a leading authority in the hottest nail trends, people from all over the world came to Naja for her expertise in Minx nails, earning her the title, Minx Master.  Within one year, about 80% of Naja’s salon clients were getting Minx services, which resulted in Extremedys’ revenue tripling. It was during this time she realized her gift for teaching others and thoroughly enjoyed providing other beauty professionals with information and training.  Naja, along with the Minx team, traveled the country training and certifying thousands of students in the application of minx nails and business building tips. Seeing a rampant need in the nail industry for business building skills, she created and taught the class, “Making Money with Minx.”

In 2011, Naja partnered with Minx Professional to create an exclusive collection of eight designs titled, “Men & Places” inspired by the men she loves and the places they’ve traveled.  With her custom line being sold, and even a Minx  pattern named “Naja”, she traveled on a three week international tour educating manicurists in the Minx application process and business building techniques. One of her stops took her to the illustrious Paris Fashion Week, “where fashion is created!”  Working backstage for Louis Vuitton, Vivienne Westwood & Alexander McQueen, Naja exclaims, “is one of best highlights of my career!!!”

When she heard there were agents for nail artists, she couldn’t believe her ears.   Naja is now an official member of the glam squad currently being represented by Celestine Agency, one of the most prestigious agencies in Santa Monica, California. Her work has been featured in  some of the world’s largest magazines, including Vogue, Allure, Seventeen, Self, Rolling Stone, Flaunt, I-D, Glamour, Nylon, Essence and many more. With nail art being in high demand for commercials and advertisements, Naja has created cutting-edge nail looks for companies like Covergirl, Target, Levis, Old Navy, Lexus, Honda & TJ Maxx.

Naja’s dedication is deeply rooted in elevating the nail industry by imparting a lasting contribution to individual nail professionals worldwide. This passion led her to partnering with another nail artist to co-own and co-host Nail Talk Radio, a weekly internet based radio show dedicated to all things nails and the professional nail market.  Every week Naja exudes her commitment to fellow nail stylists from all around the world sharing interviews with top industry leaders, nail news, techniques and business building skills. The thing that thrills her most is the amount of support received from the nail community and over $40,000 + in prizes awarded during the weekly “give away” segment since the show first aired.

Naja feels one of the most rewarding offshoots of her success is teaching others. Her”throw them into the fire” approach develops apprentices that have gone on to work with  legendary celebrities, do magazine editorial shoots and travel. She has FEMtored (a term coined on Nail Talk Radio for female mentors) many and continually gives to aspiring nail artists by answering Facebook messages and conducting monthly consultations.  Her advanced nail training academy IAN has attracted international students with hands-on and online courses.

This year Naja tries her luck on TV, with a no-nonsense business approach she is a man-eater and an  A-list manicurist to the stars, on WEtv’s hit reality show, LA HAIR- Where every day is a Hollywood holiday. Naja is paired in a salon with a group of temperamental beauty artists who all have attitude, passion, skills, deadlines, fashion – oh and don’t forget- Drama!!